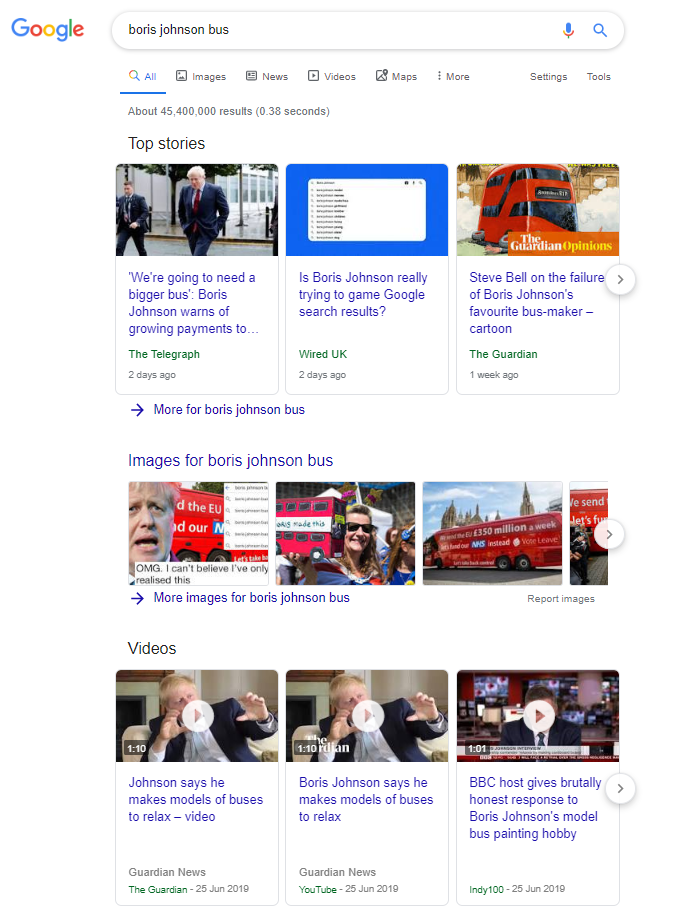 When politics becomes a game of SEO

2019 has been quite a year. Google has been pre-warning us when they’re rolling out Core Updates, and Boris Johnson is our (unelected) prime minister – our heads are spinning.

Over the last four months, we’ve noticed something fishy (kippery?). Whenever some bad press emerges on Johnson, he undertakes a bizarre and rambling interview that gets people talking. Initially you think – classic Bonkers Boris. But then the hours tick by, the clock strikes midnight, our search engines have turned into the proverbial pumpkin and what are we left with? New search engine results.

Where once lay Boris and his infamous bus, embellished with claims of millions of pounds going to the NHS and not the EU, we now find clip after clip of Johnson describing his favourite hobby – crafting model buses out of old wine crates. Picture that, why don’t you. At the time the interview took place he was battling against Jeremy Hunt for the leadership position and presumably wanted a clean slate, free from wild claims.

In the summer he gave a rather painful speech in front of a backdrop of dehydrated police as he tried to recite the caution – coincidentally, around the same time the police had been called to his house in the early hours of the morning, following claims a neighbour heard “screaming, shouting and banging.”

If you searched ‘Boris Johnson Model‘ hoping to find stories on his rumoured affair with American model Jennifer Arcuri, two days ago you would have found two pages of links to news headlines filling you in on all of the gossip. Suddenly another bizarre video interview appears – this time Johnson claims he is the ‘model of restraint‘ when accused of using violent language against Brexit opposition, a line repeated by all of the national press. Guess which links appear when you use the same search term? All at the top spot, all within eight hours.

There are other examples, too.

Of course, SEO isn’t as simple as matching search terms word for word and throwing content out into the world, safe in the knowledge one will overlap the other. But coupled with the bizarre nature of the content that Johnson is creating – in such bitesize, shareable chunks with specific key phrases – it makes it much more likely to be an SEO-success story. When content is more likely to be shared on social media – such as a video of a middle-aged man talking about crafting buses out of bits of old wood – it increases your chances further. And he certainly has search volume on his side.

Boris won’t be able to remove the negative press, that will still be around to haunt him. However, it’s four months on from busgate and ‘Boris Johnson Bus‘ still throws up almost no mention of the infamous NHS bus* – aside from a handful of image results, showing that at least these have been tagged correctly. Search results are being constantly refined, alongside hundred of Google updates, and SERP is a beast that even the government can’t control (at least in the UK, hopefully…).
*If you’re testing this search, we suggest you approach a certain Argus article with caution. You have been warned.

The takeaway from it all as it stands? His team have done a great job. If we were writing the SEO report we’d be patting ourselves on the back and opening Friday’s 4pm beers early.